This year I've committed myself to blogging each month about influential, inspirational, people that have had an impact on my career...or life...or both.  In January I wrote about Tom Peters and how he influenced my career path.  Tom had recently appeared back on my radar via twitter... and he responded to me.  That was cool.

The special sauce of social media is connecting with people you don't know, but you have a connection with their thinking, their work, their life, or perhaps just the words they share...in a non-stalker sort of way of course.  It gets even better when those you follow actually respond and choose to connect back.  This is what I learned about the power of social media back in the early 2000's and it changed my thinking significantly about the future of learning.

Part of that journey in the early days included learning about RSS feeds and the power of audio in the form of podcasts.  And as a big fan of both media and Apple, I was drawn to the MacBreak Weekly podcast on the TWiT network. This is where I was introduced the media genius of Alex Lindsey.  Later, I discovered that he was the same guy that did guest appearances on Call for Help and TechTV in the late 90's with Leo Laporte.  (I'll highlight Leo in another month.)

Sure, MacBreak Weekly conversations focus on Apple products, but what I actually enjoy most is the amazing creativity and project work the hosts of the show do in their day jobs...with Apple products.  As founder of The PixelCorps, Alex always has great digital media stories...case studies really...of practical uses of new tech.  And it was only a few years ago that I really started to hear Alex talking specifically about education, corporate training, and elearning projects.  And so began my obsession with stalking him until he agreed to give a featured session at DevLearn back when I was programming that event for The eLearning Guild.

I was finally able to pin down the busiest man in digital media, and got his commitment to present at DevLearn12.  Unfortunately, I could not get him into the room that was recording sessions which was a big disappointment for me because I couldn't even make it to his session that day. The feedback for his session was good, but I knew most attendees probably didn't "get it".

His topic was iBooks, Google+ Hangouts, and the Future of Learning Technologies. I did my best to promote the session and let people know that this wasn't just another eLearning guru pontificating about the joys of technology, but that Alex Lindsay is the REAL DEAL! But, despite a filled room, I'm sure most attendees had NO idea who they were listening too and how important his voice will be in the coming eLearning and digital media literacy revolution.

[As an aside: Next time I'll pay him to keynote. What he is doing and what he understands about technology and digital media far surpasses any keynoter I've ever booked.]

Over the span of my career a couple themes have developed: 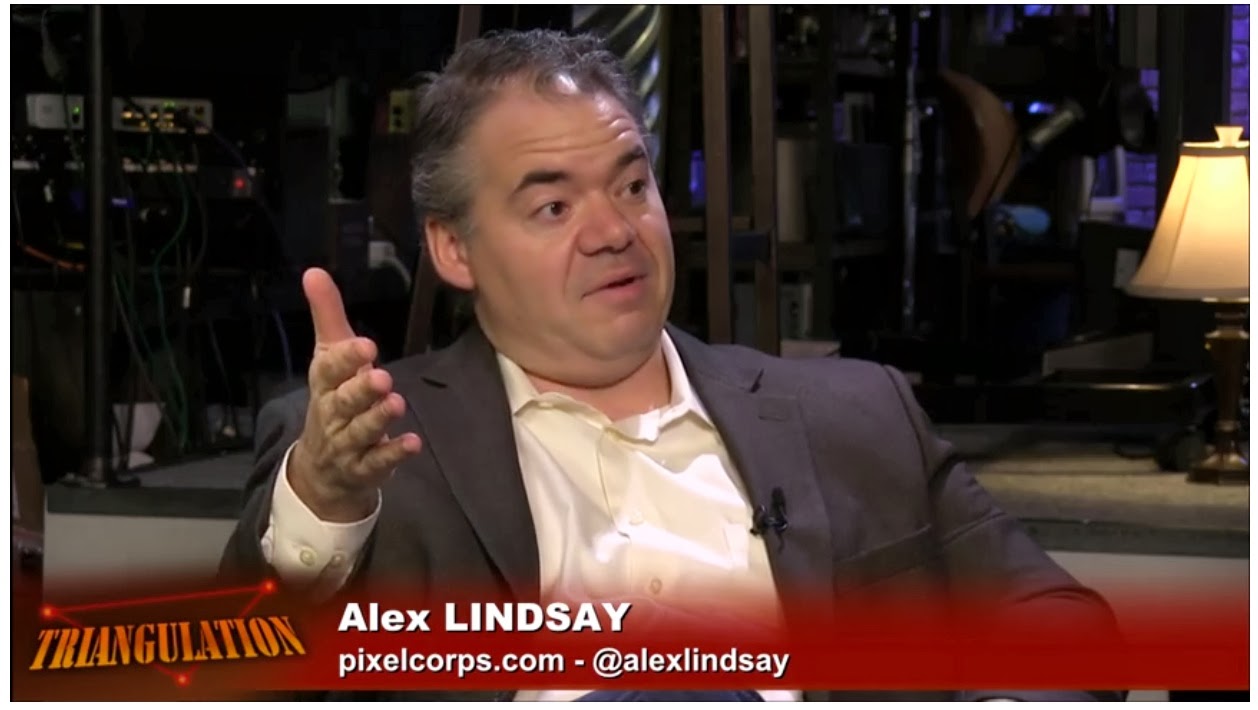 Alex Lindsay is one of those people who would weekly (when he was co-hosting MacBreak Weekly) confirm my gut feelings, and that I was not alone.  Creating, making, producing, digital media has already put a dent in the broadcast universe with YouTube's ease of use and making publishing available to the masses. Every since my first gig in broadcast TV when I first saw digital media I was convinced it would change everything.  And finding a voice like Alex Lindsay was comforting when so many people would roll their eyes.

I could write a lot more about how I've been influenced and inspired by Alex, but I'll let you find out for yourself. What prompted my picking him for the February Career Reflections was his interview with Leo Laporte on Laporte's Triangulation podcast.

It's a must see video (or audio) podcast interview. And one that I hope will help you see that Corporate eLearning is not what you think it is today.  And the importance of digital media literacy will play a massive role in our global culture...and I want you to be prepared.

"I am certain that it is important for everyone... to be able to express themselves with graphics and video...and that's how you're going to engage everyone." - Alex Lindsay

"The problem with education today is that it's run by people who are good at it." - Alex Lindsay