On August 27th I begin the next chapter of my eLearning career.  I am leaving the Training and Development industry's most important professional association, The eLearning Guild, to be part of a startup in the data center industry.  I will be the Director of Product Training for IO Data Centers.  The opportunity was far too exciting to pass up. Okay, stop laughing.  Data centers are not quite as boring as you might think.  But before I go into more about the new gig I want to use this blog post as opportunity to reflect on my time with The eLearning Guild, and why DevLearn 2012 is going to be AWESOME! 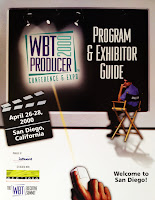 I still have the program for the first event I ever spoke at for David and Heidi.  My session was titled Creative Web-Based Virtual Reality Training (on a Budget).  It was based on my work for Intel Corp. creating warehouse process simulations.  That event was in 2000 and I was very VERY new to speaking.  But I can very easily look at that year as a turning point in my career.

In the following years I discovered that, if I was a speaker, Intel didn't mind letting me go to events. So I submitted for everything that was out there at the time.  And in 2006 I was speaking at another eLearning Guild event, between sessions, when I took the call that finalized my leaving Intel.  I remember talking with Heidi in the hotel deli right after that call.  But it wasn't until 2007 that I was brought on the Guild staff to work in the newly formed Research department and shortly there after asked if I would be interested in working with Heidi on programming events.

The 5 years that followed were without question the best years of my career.  I feel extremely blessed to have worked with EVERYONE there.  It's been an amazing learning experience.  The best part of being the Program Director for DevLearn has been meeting all of you.  I've met many of the greatest people in my life because of this job.  AND the greatest part about leaving the job is knowing that I WILL NOT be leaving the Guild family.  The community they have built is filled with the brightest minds in this industry and while my job may be changing I will always be part of the Guild community.  In all honesty, I will need y'all now more than ever :)

I currently plan on hosting DevLearn one last time.  I'm not certain of the details, but I need to be there.  I am EXTREMELY proud of this year's program.  With each passing event I learned, and adapted, and tried to make the next event bigger and better for the community of professions that trusted me to do so.

Early on when I was unsure if I could even DO the job, Heidi just said, "Brent, build the event that you would be excited to attend." That statement guided me in everything I did from that point on.  And knowing they trusted me enough to do so, was a blessing.  I can honestly say that I've been excited about every DevLearn I've built. And making them better and better each year has been harder and harder.  DevLearn 2012 has been the hardest to build yet, but only because it's EPIC!  And I don't say that because of what I've done, but because the eLearning industry is at a very unique place in it's history.

Technology is changing everything, and it has been for a long time now but this year feels like a tipping point for the impact on the eLearning industry.  Think about mobile, social, the improvements in authoring tools, new standards like TinCanAPI, and so on.  But that's the easy stuff you can see and touch and easily understand.  What I've always tried to do with DevLearn is to help attendees FEEL the cultural, and emotional, changes that impact our work as well.  It may sound counterintuitive, but our work is much less about the technology and more about people...and more so about how the technology impacts people.

And by people, I mean everybody! I mean classroom teachers at all levels: Elementary school teachers, higher ed teachers, corporate trainers, trade school trainers, language instructors, EVERYBODY.  eLearning is no longer reserved for the geeky types.  The e in eLearning is for EVERYBODY!  We all at some point TEACH!  And everyone is being influenced by the technology in their lives.  Developing eLearning is NOT just for the official eLearning developer or whomever has the job title and responsibility to do it.  Anyone who teaches has an opportunity to be BETTER at what they do using the awesome power of today's technologies.

This year's tag line, Embracing Technologies for Training and Development, is all about everyone being better at what they do using the strengths of technology.  I know there are trainers who do not consider themselves eLearning professionals and therefore skip events like DevLearn.  If you are one of those people then I would urge you to consider DevLearn this year.  Here's a little secret I'll tell you about that tag line.  It's not all about YOU embracing technology, it's also about the technology embracing you.  You can't make the technology go away.  It's not a fad.  So what are you going to do?  Do you run away? Tell students to leave their device at the door? NO!

And if you've been scratching your head wondering what the heck I was thinking when I booked the keynote speakers, well that's your answer! No, they aren't Instructional Designers.  No, they aren't career eLearning developers, elearning gurus, or eLearning thought leaders.  And THAT'S the point! Each of them has an amazing story to tell.  Each of them embraces technology in one way or another.  They are all EXTREMELY different people with EXTREMELY unique backgrounds with one thing in common.  THEY. ALL. TEACH.  But you will need to see them for yourself to truly understand why they are important to DevLearn at this time more so than any other.

Anyways, this is it! DevLearn 2012 is my last as the Program Director.  I hope to see you all there for one last hand shake, hug, distant wave, or maybe even a beer or two...but no karaoke.

If you have any interest at all in playing a role in the next generation of DevLearn, you should contact David Holcombe and/or Heidi Fisk.  Check http://elearningguild.com for contact details.

Congratulations and good luck to you Brent! Looking forward to saying hi at DevLearn this year.

All best wishes in your new role Brent, and kudos to you for everything you've done to date!

Congratulations on all you have been able to contribute and on the next big step.

Enjoy it. Will I see you at Performance Support in Boston?

Thanks for all the kind words Donald, Sean, and Allison.
Unfortunately, I will not be at Performance Support in Boston. But our paths will cross again soon. I'm looking forward to it.
Cheers!

Congrats on your new adventure bro! Personally, I think data is super exciting!!!

Thanks a million for your amazing work with the Guild and of course, we will see you around.

Congratulations on your new job, Brent. I'll always fondly remember how you accepted some of my proposals for speaking early on and coached me on how best to present them. You and the eLearning Guild team have built a great community for practitioners and our audiences. You will be missed, but I'm sure you'll always be a key part of this evolving community.

Congrats on your new opportunity Brent. I'm looking forward to seeing you at DevLearn.
I know I speak for many when I say "Thank You" for all you've done to help push our industry forward.
-David

Congrats on your move Brent. Everyone is going to miss you.

Brent,
You are a wonderful individual who takes lot pride in what you do! Love your passion!

Stop by the NexLearn booth at DevLearn and grab your favorite screaming flying Simians!

I am sure your kids will love it this time too.
- AJ Aluthwala

Brent, your deep rooted passion for eLearning is contagious. You will be missed as host in future events, but I have a sneaky feeling we'll be seeing your name pop up again in concurrent sessions and panel presentations to showcase all the amazing work you'll be doing in your new role! Best wishes!

Brent - I was excited when you became Program Director at the eLearning Guild and excited for you now in your new position. Good luck and keep us posted :)

Nowadays, it is generally thought that new technologies can highly assist in education. In young age groups especially, children can use the huge interactivity of new media, and develop their abilities (skills), information (knowledge), perception of the globe, under their parents monitoring, of course.

Wow! Congratulations and best of luck to you, Brent!

Brent, You will be missed.. but we hope you continue to lead us in some form or another. More power to you. Ray

Congratulations and well done. There is nothing like a new challenge to create new energy. Judging by what you have already achieved I can almost predict what the outcome will be! :-)