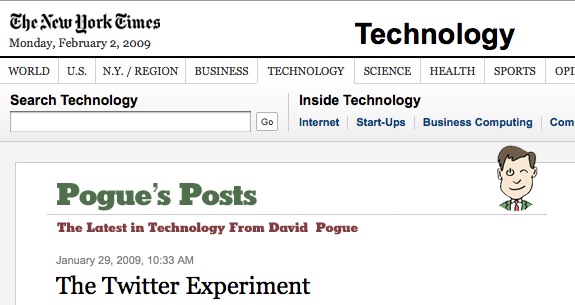 David Pogue was the keynote at the TK09 conference in Vegas last week.  In case you did not know, @pogue is the tech writer for the NYTimes.

During his keynote David posted a question on twitter asking for a cure for hiccups.  He received many responses very quickly.  My personal favorite was from the folks that replied, "Booooooo, (twitter scare)".

I was not feeling particularly clever so I simply responded with "hello from the back of the room".  I just wanted to participate.

So, I saw his blog post last week after the event but I did not read it closely enough.  This morning, via twitter, I'm told that @bschlenker was in the NYTimes.  How cool is that!? Never thought I'd be quoted...or is it twoted... in the NYTimes.

In my session I mentioned that many people now use twitter as one of their sources of news.  I heard many scoffs, and saw many eyes rolling.  But I'm subscribed to all of my local news channels twitter feeds, and a couple national twitter feeds.  Its amazing how cool it is to get news updates in near real time.

Remember, it's not about the technology - it's about the people, the content, and context.  It may be twitter today, and tomorrow something else.  Forget about the names and focus on the functionality.

Come say hi to me at:
The eLearning Guild's Annual Gathering 2009 Conference and Expo
March 10-13
Orlando, FL
Posted by bschlenker

"Remember, it's not about the technology - it's about the people, the content, and context. It may be twitter today, and tomorrow something else. Forget about the names and focus on the functionality."

What an important point to make! I am so glad I read this. Sometimes I get hung up on the tool, but you are so right. Its the features, what it can do for you that are the most important.

I still get caught up in the tech too. It's so easy to do these days. Which is why I need to constantly remind myself as well ;-)

A great example is in seeing how so many apps are becoming "wiki-fied": everyone can edit and share and monitor.

I couldn't agree more. Not only the tools but names also get people hung up---when they first become popular they can strike us as trite and silly---blogs, wikis, twitters. Many people (including myself, at times) truly do need to get over our preconceptions and conclusions about a tool's functionality, and explore the potential of each new collaborative tool that marches onto the cyberscene.