During the last #lrnchat session someone mentioned that Tweetchat.com was back.  In the early days of #lrnchat I used tweetchat heavily to follow hashtag conversations.  As I was thinking about it I began to remember other Twitter tools like the open source TwitterCamp we used at live events to display the twitter stream.  And of course that led me to the very beginning.

Twitter launched in 2006.  Which, for some reason, doesn't sound right.  It feels like it's been around a lot longer than that.  I signed up in January of 2007. And according to a fancy stats service I've been a user longer than 99.9% of all users.  Gotta love big data. 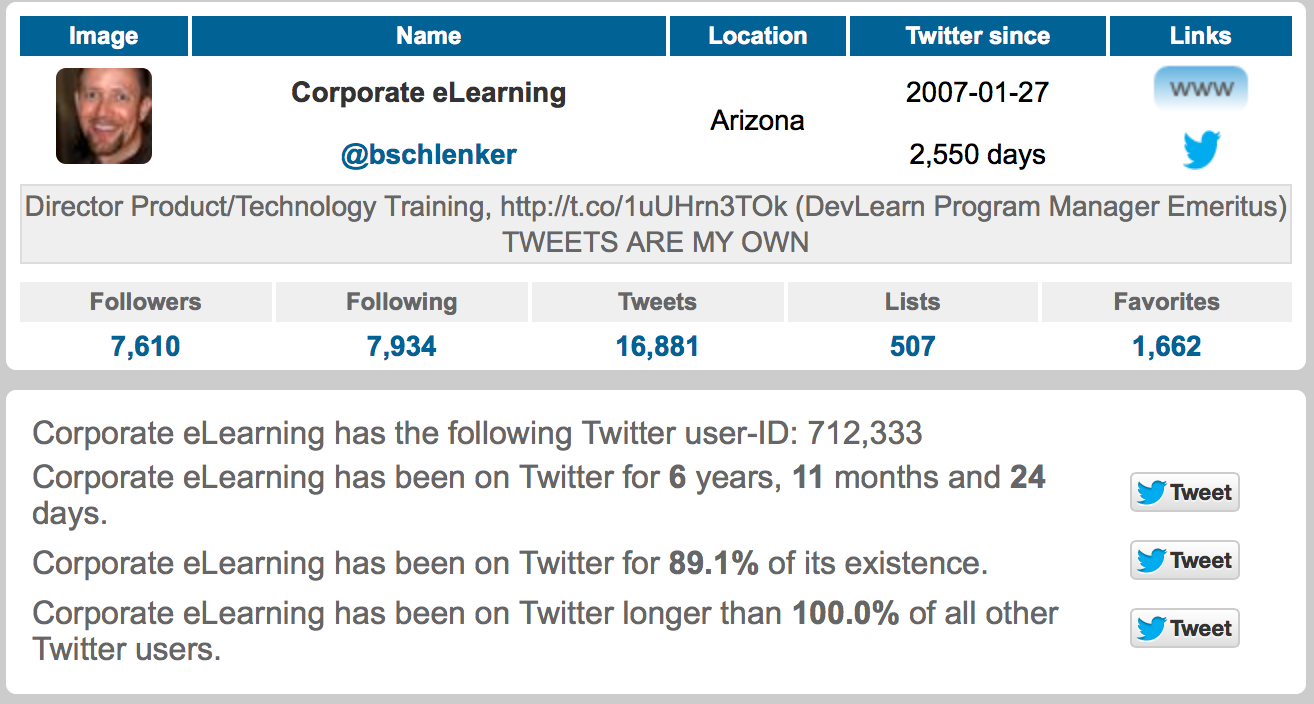 So, by early 2008 I began testing Twitter's usefulness in a conference setting at The eLearning Guild's Annual Gathering.  By the end of that year we had our first twitter monitor setup on the hallway of the DevLearn2008 event. You can read more about that and the power of back channel conversations here. And if you won't take my word for it that Thomas Stone did a nice blog post about it as well here. And since Thomas mentioned Michelle Lentz I will go ahead and post link to her post about DevLearn2008 as well. Twitter became a big deal.

The following year, DevLearn 2009, we were ALL IN with social media.  We launched a Social Learning Camp hosted by Mark Oehlert. It wasn't just about twitter, but if I recall we did have the event twitter stream running on 2 monitors this time instead of just one.

Twitter at events had become a big deal. I received many emails and calls asking how we did it.  I was happy to share...it's no secret. And that's what community is all about, right? I found an open source app called TwitterCamp to display the tweet stream on big screen monitors.  While people were still unsure what the heck twitter even was, this was a good way to help them SEE it in action and not just hear about it from some of the speakers. 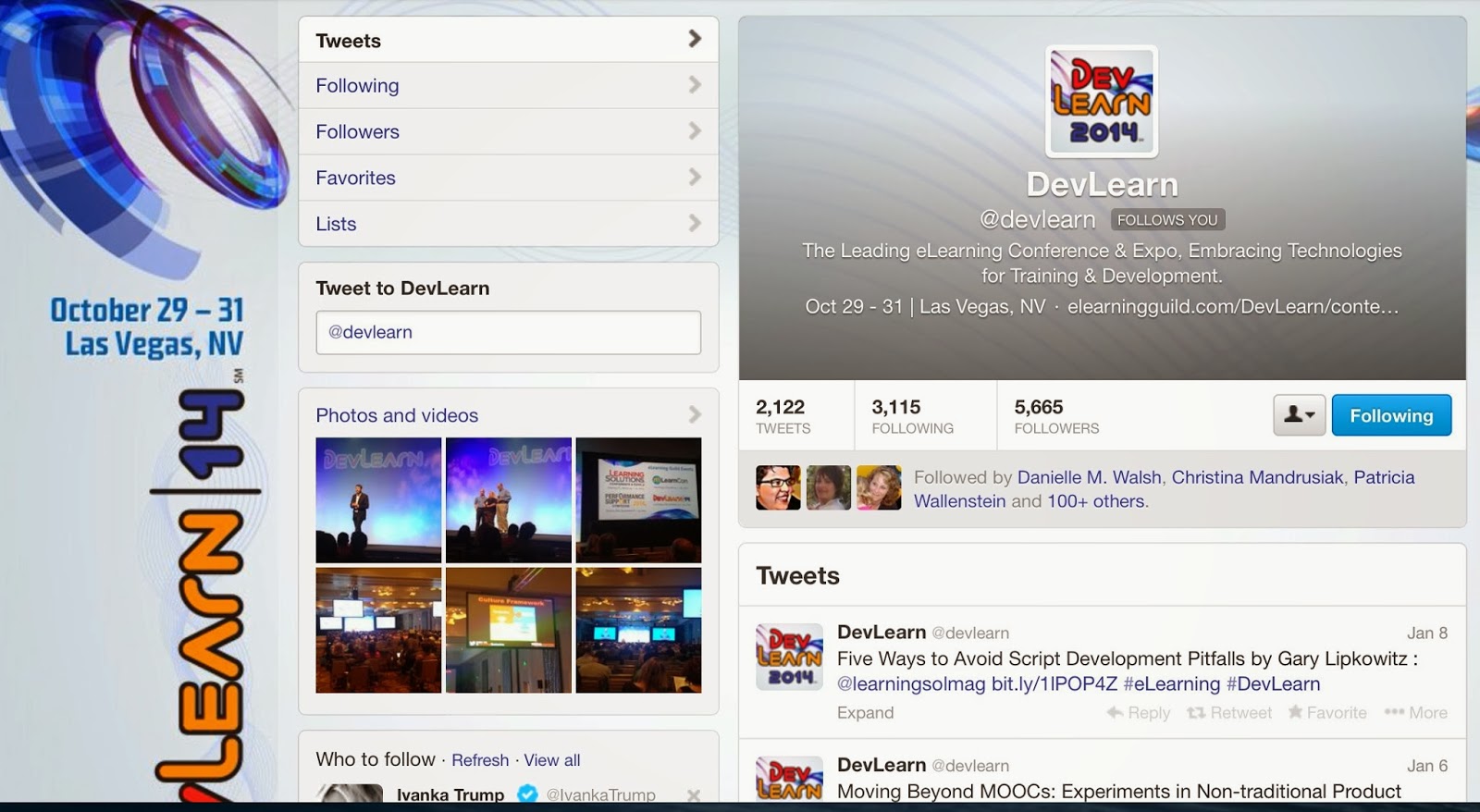 Now that Twitter is so popular, I'm not sure big screens are even necessary.  We now have iPads and Mini iPads to display our own custom twitter streams during events.  And most event organizers now have event twitter accounts, and predefined #hashtags.

Twitter, in my opinion, was the one social media tool that really encouraged the idea of the Backchannel.  The backchannel is the stream of conversations happening on social media while a live event is happening.  Audience members are tweeting their personal commentary LIVE during general sessions, concurrent sessions, and throughout their event experience.  What? No morning coffee setup in the hall? Just tweet about it and I'll bet you see coffee their the next morning.  The backchannel gives you a voice in an otherwise loud and crowded social event.

In the early days I remember speakers being very upset about the audience looking at mobile devices and laptops during their presentations.  But the backchannel is here to stay and I don't hear the grumblings much any more.

One cannot mention the backchannel without admiring the work of David Kelly, King of the Backchannel.  Check out his post on What Makes a Great Conference Backchannel.

Here is one of my blog rants about a #lrnchat session on the topic of Subject Matter Experts.

If you aren't yet familiar with Twitter Chats then #lrnchat is a great place to start.  Check out lrnchat.com to get started.

You can connect with +Jane Bozarth @janebozarth, who is one of the remaining original hosts, directly if you want.  That's part of what's so great about social media.  Go ahead. Send her a tweet. I dare you. You won't regret it.

I'm not sure how it all started.  But at some point those of us who had been early participants in #lrnchat thought it might be a good idea to actually all meet in one room and do #lrnchat together...in person.  And yes, it's actually as weird as it sounds.

Imagine 20+ people in a room all staring down at various laptops and other devices virtually chatting with each other.  Like maybe we should have been using that time to chat with each other...for real? Maybe? I don't know?  But strange as it sounds...it was kind of fun.  And so it became another opportunity for like minded learning professionals to gather around...and chat.

You can always find the #lrnchat -ers at Guild events gathered around a long table with a bunch of curious onlookers gathered around...but keeping their distance. The spectacle has the look of a strange new age digital prayer circle.

Face-to-face meet ups are great, but adding virtual attendees adds value for everyone.  While it does seem a bit strange to outsiders who've never participated, it doesn't seem all that strange any more to me.

Now the big question is how long will it take before this type of inclusive meet up becomes natural in work environments?  Does your have company have Lync? or Skype? or Chatter? or any of the other texting tools for the enterprise? Do you use it?

I'd love to hear other stories about how you came to be involved with Twitter and/or other social media.